Serge Oryan was born in Baskinta, Lebanon. He majored in Advertising and Graphic Design and landed a professional career in advertising as a Regional Creative Director. He moved to Dubai in 1999 and was assigned on mega brands in several leading advertising networks.

During his career in advertising, and with a creative mind and an advertising knowledge, Serge embarked into a movie making adventure and started his film directing career. In 2007 he quit advertising and moved back to Beirut  to establish his own film production house, and has been directing and producing since.

Throughout his life, Serge has always been fascinated by faces, and how, on the basis of the facial features, especially the eyes, someone’s character can be revealed. His choice of characters and the facial expressions are very present and dominant in his large scale portrait paintings.

Serge has participated in many collective exhibitions at a young age, and had his first solo exhibition “EYES ARE THE WINDOW TO THE SOUL” in 2015.

Beside his work as a film director, and his passion for painting, Serge has countless acclaimed credits to his name as sculptor and photographer. 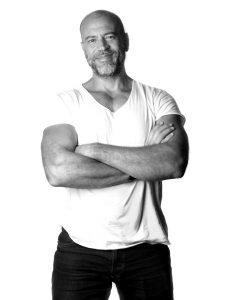 There is something amazing about looking into someone’s eyes, you see good and evil, you see honesty and disgrace, you see loyalty and deception.

My daily job is a film director, and the definition of a film director is a story teller, I spend my time looking for the right characters to tell my story, I look for real people, genuine characters, believable and charming, a bad character can ruin a good story, and a good character can pull you into the essence of the story, this is where my job is delivered.

In my career I travel and I meet a lot of people, different characters and different souls, some come and go quickly and leave no impact at all, and some stay in our memory, and it’s never the physical appearance that sticks in our mind, it’s what we see in the eyes.

“EYES ARE THE WINDOW TO THE SOUL” 2 is a collection of big-scale faces, different characters, different expressions. The eyes are the Centre of the attention, each one of them tells a different story, very intense with a strong contrast. This strong contrast gives the face an attitude and takes you directly through the eyes to the inner soul of the character.

The portraits I draw touched my soul at some point of my life and will stay in my memory forever.