Ka3eb 3aleh is a modern day Pygmalion, a serio-comedy of manners which explores sexual harassment, misplaced love, and the possibility of a four sided love triangle. The combatants are a sexy and volatile young woman, an Arabic literature professor, a lawyer, and an aristocratic fiancee. The play is inspired and adapted from ‘Spike Heels’ by Theresa Rebeck. 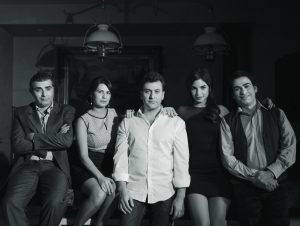